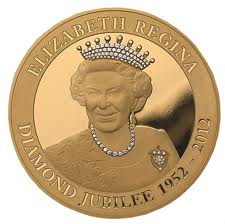 The Royal British Mint has released several products which celebrate the 60th Anniversary of the Coronation of Queen Elizabeth II.

The Royal British Mint has released several products which celebrate the 60th Anniversary of the Coronation of Queen Elizabeth II. This follows the many Diamond Jubilee products issued last year to celebrate 60 years since the Queen’s accession.

The 2013 60th Anniversary of the Queen’s Coronation 5 pound Coin was released in December 2012. The reverse design features a depiction of the Imperial State Crown, which was worn just after the Coronation ceremony. An inscription above the crown reads “To Reign and Serve – A Vow Made Good”.The obverse of the coin contains the Ian-Rank Broadley effigy of Queen Elizabeth II with the “2013″ date.

This coin is available in copper-nickel composition in brilliant uncirculated quality, packaged with an illustrated folder. A 22-karat gold proof version is available with a mintage limit of 2,000.

The obverse designs of the coins feature each of the portraits that the Royal Mint has used for circulation coinage, which were designed by Mary Gillick, Arnold Machin, Raphael Maklouf, and Ian-Rank-Broadley.

The Royal Mint has a section of their website which showcases products celebrating the 60th Anniversary of the Queen’s Coronation.