The wave of distrust in the dollar intensified after the German Bundesbank demanded the return of the huge quantity of gold stored in the U.S. Federal Reserve, who refuses to do so before 2020.

The entire operation could be delayed until 2020. The German representatives asked for permission to visit the vault of the Central Bank of the United States but did not get it.

Germany, which maintains there about half of its gold reserves, has reason for concern. In general, U.S. financial institutions are known for sell what does not exist.

For example, in 2012 Goldman Sachs sold gold certificates, ensuring that were secured by real gold in its vaults. However, as it turned out, not there was gold, and the bank was working on the basis of a fractional reserve system assuming that few depositors will demand their gold recovered.

Peter Boehringer, founder and president of the German Association of Precious Metals, believes it is a bad sign. “We have pushed the Bundesbank much, we sent him a lot of questions, as well as other entities. We have to know why not doing the appropriate audit, why not press to his partner, especially at the Federal Reserve, central bank to make an adequate audit. Why it is not possible to repatriate this gold? So there are a lot of reasons and unanswered questions,” he told Peter Boehringer to RT.

“The U.S. and the Federal Reserve are monetizing currently between 60-80% of newly issued federal debt, Treasuries. And its free purchasing is bad news for the U.S. debt, evidence that something is wrong with the quality of the U.S. dollar as a reserve currency. China and India probably consume 2,300 tons of gold altogether this year, which is almost 100% of world production”, he explained.

The U.S. Federal Reserve is one of the most secretive organizations in the world. For many years, stores vast amounts of gold from different countries. If once regarded as one of the safest places for bookings of several countries, now the situation has changed, since the gold stored there is running out as a result of its sale, bail or use like financial guarantee. 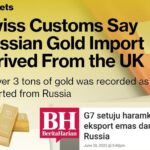